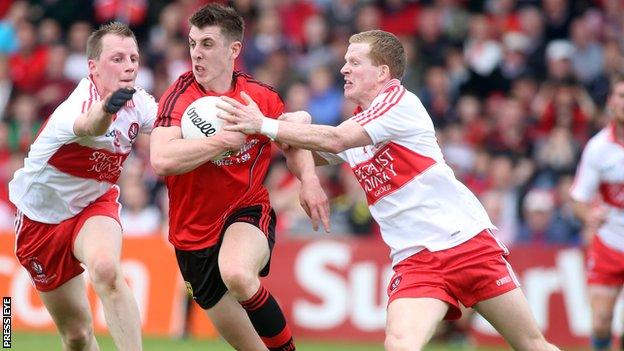 Down manager James McCartan refused to be daunted by the prospect of playing All-Ireland holders Donegal in the Ulster Championship semi-finals.

"I think we opened them up as much as anybody over 55 minutes," he said.

"The floodgates opened when we went to try to win the game and the big scoreline in the end did not worry me."

Donegal will be strong favourites for the 23 June rematch but, if Down could reproduce their second-half display at Celtic Park, it might not be a one-sided affair.

The Mourne men were 1-10 to 0-9 down at half-time but bossed the second half - outscoring Derry 14 to five - with goals through Donal O'Hare and Mark Poland.

"Conceding 1-10 in a half is not going to win you many Championship games," said the Down manager.

"But we kept them to five in the second half. We still had a bit of scoring of scoring to do and, thank goodness, we did.

"They had the momentum at half-time and we needed to change that.

"They boys showed great energy in the second half - there was no point leaving anything in the tank.

"Playing Donegal will be an awesome task, they are All-Ireland champions. We have nothing to lose and will give it a go."

O'Hare, who scored four points in addition to his goal, said the Down players had been on the end of some tough talking from McCartan in the changing rooms at half-time.

"There were some harsh words said because Derry had been on top for the last 15 minutes of the first half and things were not going for us," said the 22-year-old Burren club man.

"Mark Poland is our captain and he showed great leadership today. He knows the balls to play."

Derry defender Gerard O'Kane admitted they may have taken their foot off the gas after the interval.

"Every game this season, we have won the second half - we maybe took our eye off the ball.

"Down overran us and their goals came with runners getting down the middle.