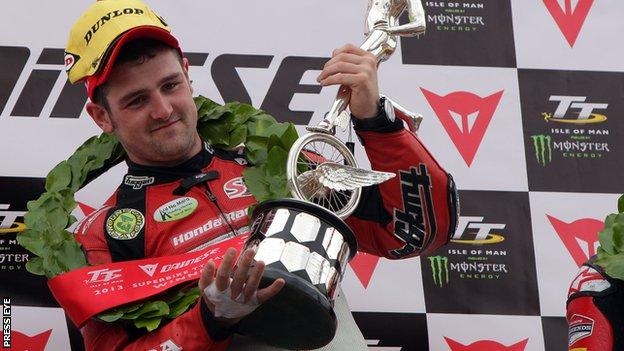 Michael Dunlop blasted his way to a fourth Isle of Man TT win by dominating the six-lap Superbike event on his Honda Fireblade.

The Ballymoney rider enjoyed a 41-second lead over runner-up Cameron Donald at the end with John McGuinness a further 41 seconds behind in third.

For Dunlop, it was his first-ever win in the premier 'big bike' class.

McGuinness set a new absolute lap record at 131.67mph on his final circuit of the Mountain course.

It hasn't sunk in yet, it really is something special to win this race

The opening solo race of the week had been rescheduled for Sunday after the organisers decided to allow further time for practice on Saturday following a week punctuated by weather problems and delays.

Prior to the race it was McGuinness who grabbed the attention, with his bike painted in the same livery which adorned Joey Dunlop's machine on his last Superbike success at the Manx road racing festival in 2000.

McGuinness also donned the leathers which Joey wore 13 years ago as Honda celebrated the 30th anniversary of the legendary rider's first IOM TT win on a Honda.

Gary Johnson was the early leader of the race but Dunlop headed the timesheets by the end of the opening lap after posting a speed of 130.84.

Guy Martin was three seconds behind in second, with Johnson third.

Dunlop extended his advantage to 15 seconds by the end of lap two, McGuinness having assumed the runner-up spot at that stage.

Johnson failed to make his pit stop after running out of petrol at the Nook.

Brookes bettered that time with 127.73 on his closing lap as he finished 10th.

At the end of the third lap, Dunlop was 24 seconds ahead of McGuinness, with Cameron Donald a further 16 seconds in arrears.

The margin at the top of the leaderboard was 30 seconds after lap four and then McGuinness dramatically dropped back to fourth after being penalised 60 seconds for speeding in the pitlane.

The Morecambe rider managed to overhaul Martin on the sixth lap to secure the final rostrum position and complete a clean sweep of the top three places for Honda.

After the race Dunlop described his victory as "just fantastic, a dream come true".

"It hasn't sunk in yet, it really is something special to win this race.

"My pit crew did a great job and I was able to take it easier on the last few laps. I'm not worried what happens for the rest of the week," said the 24-year-old, whose fatest lap was 131.19 on his second circuit.

The racing continues on Monday, with the Supersport and Superstock races, both over four laps.