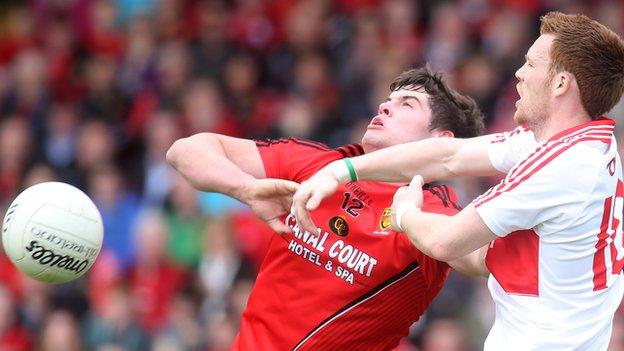 Goals by Donal O'Hare and Mark Poland saw Down storm back from a four-point half-time deficit to beat Derry 2-17 to 1-15 in the Ulster Championship quarter-finals.

Derry had ended the first half strongly with Mark Lynch's goal helping them to a 1-10 to 0-9 lead.

But the Mourne men outscored the hosts 2-8 to 0-5 in the second half to seal a semi-final clash with holders Donegal.

Conor Laverty set up O'Hare to palm in on 45 and seven minutes later the impressive Poland also found the net.

Derry looked a beaten side after the goals and Down closed out a deserved five-point victory.

It could all have been so different if Eoin Bradley's goal-bound shot had not been brilliantly saved just before half-time.

Brendan McVeigh somehow instinctively palmed the ball away to deny the Oak Leafers a seven-point cushion at the interval.

Still, four points adrift at the break, Down looked in trouble but, inspired by Longstone club man Poland, they summoned a strong revival to clinch the 23 June clash with the All-Ireland champions.

Down were quickly out of the blocks, scoring points in the first minute through Poland and Ambrose Rodgers.

Points continued to be exchanged with Eoin Bradley from play and a Benny Herron 45 boosting Derry and Niall Madine and Kevin McKernan registering for the visitors.

Fine scores by James Kielt and Enda Lynn brought the Oak Leafers level, but scores by O'Hare and McKernan - the latter a brilliant strike with the outside of the right boot - gave Down the lead, 0-7 to 0-5.

Eoin Bradley scored from play, James Kielt landed a long-range effort to level and Bradley got his third point after keeper Brendan McVeigh's poor kick-out had been intercepted by Ryan Bell.

Madine got his second point for Down but further scores by Bradley and James Kielt saw Derry pull away.

Then came the goal with Eoin Bradley passing for skipper Lynch who slipped a low shot past the exposed McVeigh for a 1-10 to 0-8 lead.

Declan Rooney scored from play for Down and just before the break Derry were denied a seven-point interval advantage when McVeigh pulled off that fine save to paw away Eoin Bradley's goal-bound shot.

Madine and Poland points saw Down gnaw away at the deficit but O'Hare's goal really handed them the momentum.

Poland played a good one-two with Conor Lavery before feeding O'Hare who found the net.

O'Hare added two more points from play before Kalum King kicked on for Poland to finish off a well-worked goal.

As it was, McKernan (2) and substitute Jerome Johnston bagged the final three points to see James McCartan's men safely through.