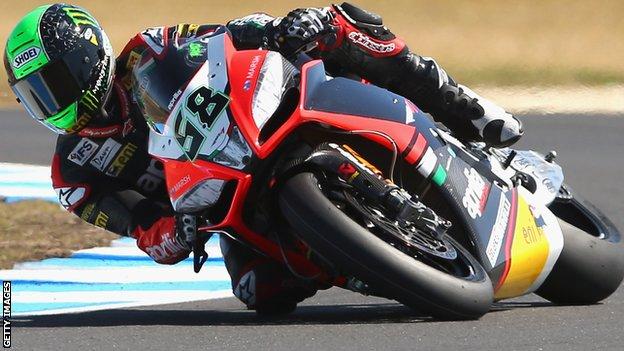 Eugene Laverty left the World Superbike round at Aragon empty-handed after failing to finish either race in Spain.

The Aprilia rider led in the early stages of race one but was forced to retire and the 26-year-old then crashed out on the first lap of race two.

Laverty lies third in the championship on 45 points despite the poor results.

Jonathan Rea finished fourth in the first race and 15th in the second race and is ninth in the series, which is led by Sylvain Guintoli on 85 points.

Guintoli is 22 points ahead of Welsh rider Chaz Davies, who comfortably won both legs at Aragon on his BMW.

Laverty, who was sixth in last year's championship, came into the Aragon round joint top of the standings with Aprilia team-mate Guintoli, after winning one of the races at the opening round at Phillip Island in February.

The Northern Ireland rider qualified second in Spain and went straight into the lead at the start of race one, before being forced to withdraw.

The Toomebridge lad pulled into the pits with an electrical problem on lap four.

He re-joined the race after adjustments were made to his bike but was forced to retire after 14 laps.

Another fancied runner, England's Tom Sykes, was also forced out with mechanical problems, leaving the way free for Welshman Davies to take the second World Superbike win of his career.

The 2011 World Supersport champion won by a convincing eight seconds from Guintoli.

Davies completed his double in race two, followed by Guintoli and Sykes.

The next round of the championship will be held at Assen in two weeks' time.