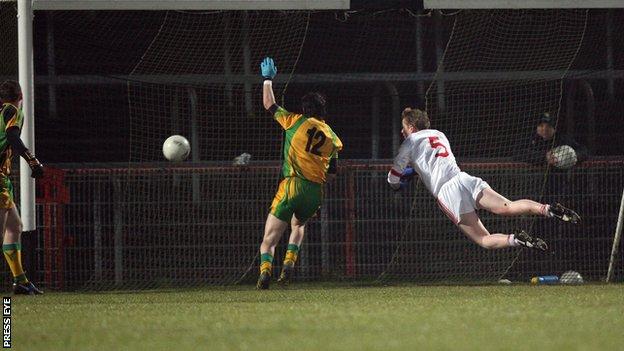 Donegal coasted to a 0-15 to 1-6 win over Tyrone at Healy Park to set up an Ulster U21 Football Championship semi-final meeting with Derry.

Paddy McBrearty inspired his side with a seven-point display that sent pre-match favourites Tyrone crashing out.

Donegal led 0-8 to 1-3 at the interval, with Stefan Tierney netting for Tyrone.

Donegal forward McBrearty was the greatest attacking threat in Omagh, scoring five points in the first half as his side seized control.

A series of counter-attacks produced scores for the visitors, with Odhran MacNiallais and William Gillespie also hitting the target.

Tyrone had scores from Darren McCurry, Conan Grugan and Ronan O'Neill, and managed to plunder a goal against the run of play in the 26th minute when Richard Donnelly crossed for wing back Tierney to punch home.

After surviving a spell of Tyrone pressure, Donegal closed out the win with late points from Luke Keeney, Gibbons and Eoin McHugh.