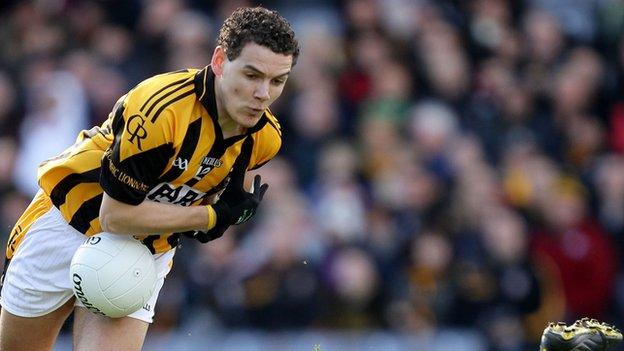 The father of the GAA player allegedly racially abused in last month's Ulster Club Final has made clear his anger amid reports that bans imposed arising from the game have been reduced.

Kilcoo player Aidan Branagan's six-month ban is believed to have been cut to four months.

His brother Daryl's four-month ban is understood to have been overturned.

"I would like to ask the question why the six months (ban) was rounded down to four months.

"For them to round it down to four months makes a mockery of this issue that they are trying to sort out."

Mr Cunningham played GAA for Crossmaglen and Armagh and Irish League football for Portadown during the 1980s and early 1990s, and said that he received racial abuse every week in his soccer career.

Crossmaglen player Cunningham told the match referee during the Ulster Club Final that he was being racially abused and spoke about the issue during media interviews after the game.

The Crossmaglen player said that the "n-word" had been used during the game.

Following Cunningham's allegations, Ulster GAA president Aogan O Fearghaill said that anyone found guilty of racism would be dealt with "as severely as possible".

The Ulster Council is understood to have asked the Kilcoo club to provide information on one of their supporters thought to have been involved in the racial abuse incident.

There are reports that the Down champions may be about to forward this information to the provincial body although the Ulster Council said on Tuesday that the investigation was "still ongoing".

"We can make no comment on this issue at this time," said an Ulster Council spokesperson.

"We can't confirm that the ban has been reduced or rescinded because the process is ongoing."

Aidan Branagan still has the option of launching a further appeal against his now four-month suspension.

Both Branagan brothers were handed charges of bringing the sport into disrepute arising from the alleged Ulster Club Final incidents.

Kilcoo released a statement saying the club condemned abuse and would co-operate with the Ulster Council's investigation.

The GAA is to discuss how to deal with racism at its annual congress in March.