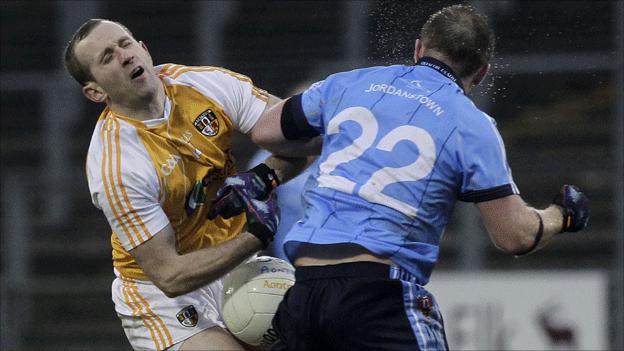 New Antrim manager Frank Dawson got his reign off to a good start with a three-point win over UUJ in Sunday's McKenna Cup Section C game at Casement Park.

Antrim raced into a four-point lead but the students levelled thanks to Declan Lynch's 18th-minute goal.

Kevin O'Boyle found the net for the Saffrons 10 minutes later and his team enjoyed a 1-10 to 1-3 half-time lead.

A second Lynch goal midway through the second half cut the gap to four points but Antrim held on to claim victory.

The home side were 0-4 to no score to the good after nine minutes with O'Boyle and Michael Pollock adding scores from play and Paddy Cunningham slotting over a free.

UUJ finally got on the scoresheet after 11 minutes through Emmet McGuckin, and Colm Duffin then cancelled out Cunningham's reply.

For all Antrim's early dominance they found themselves on level terms after 18 minutes when Lynch raised the game's first green flag, but when O'Boyle palmed into the UUJ net 10 minutes later, Antrim were back in control.

McCann, Kieran Close and full back Sean McVeigh all added scores to give Antrim a 1-10 to 1-3 lead at the break.

The students started the brighter after the restart however, with Ruairi Corrigan and Aaron Devlin adding scores.

After Lynch's goal, three points separated the sides on 54 minutes when McGuckin slotted over from play.

Two points from impressive Antrim substitute Colm Fleming steadied the Antrim ship as the Saffrons started the year with a victory despite late scores for UUJ from Gregory McGovern and Richard Donnelly.