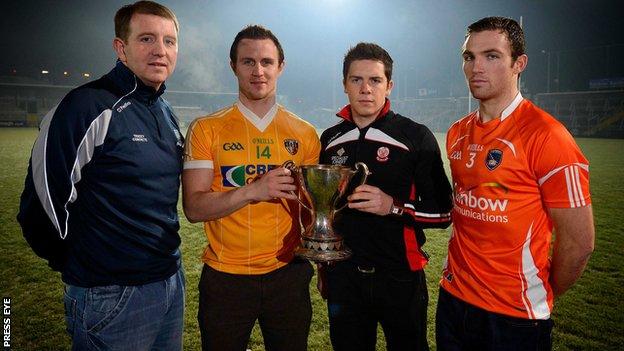 The format of the 2013 McKenna will not be changed despite Queen's University's withdrawal from the competition.

There will be two groups of four teams and one of three with the group winners and the best runners-up going through to the semi-finals.

The team second in the three-team group will not have as good as chance of progressing, after just two matches.

Queen's pulled out after a dispute over the availability of their county players.

The college teams used to have first call on their players who were also involved with county squad.

But in recent years those students have come under increasing pressure to further their county prospects, rather than represent their university.

The colleges teams - Queen's St Mary's and the University of Ulster at Jordanstown - had argued that they needed their full panels to have any chance of competing against Ulster's nine senior county teams.

They also wanted a full quota of players in the build-up to the Sigerson Cup, an All-Ireland competition which is regarded as a highlight of the college football calendar.

Queen's, who lost all three of their matches in the 2012 McKenna Cup, would have played Armagh, Cavan and Down in this year's competition.

Those counties now make up Section B while Section A contains Donegal, Fermanagh, Monaghan and St Mary's and Section C comprises Derry, Tyrone, Antrim and UUJ.

The Ulster Council revealed that five players included in the Queen's panel for the McKenna Cup had also been named in county squads.

Last month, Council president Aogan Farrell appealed to counties to ensure that the universities teams would have first call on student players in the competition.