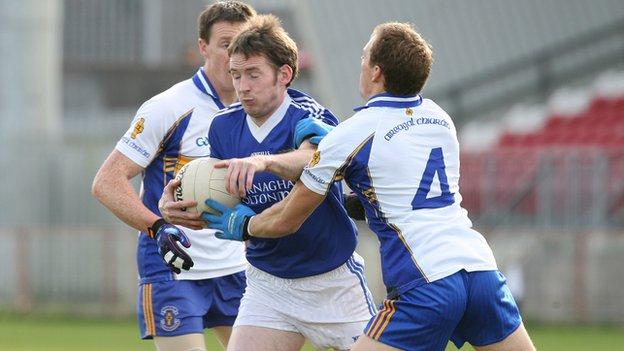 Errigal hit four points without reply to lead 0-5 to 0-3 at the break but Dromore fought back to go two ahead.

Peter Harte and Davy Harte were among the scorers as Errigal fired over five unanswered points they went on ease to a five-point victory.

Dromore's Cathal McCarron was shown a straight red card late on for striking.

Another busy weekend of club action also included Kilrea's 1-13 to 0-16 draw with Slaughtneil in the second Derry SFC semi-final at Celtic Park.

Ciaran O'Kane hit Kilrea's first-half goal as they led 1-8 to 0-8 at half-time against Slaughtneil.

Slaughtneil responded with five straight points after the break to lead by two but only for Kilrea to take the lead again.

However, Jim Kelly's point earned Slaughtneil a replay which will take place next Wednesday.

The winners will face Ballinderry in the Derry decider.

Kilcoo beat Bryansford 1-11 to 0-13 in Friday's first Down SFC semi-final while Mayobridge hammered Longstone 4-15 to 1-10 at Newry in Sunday's second semi.