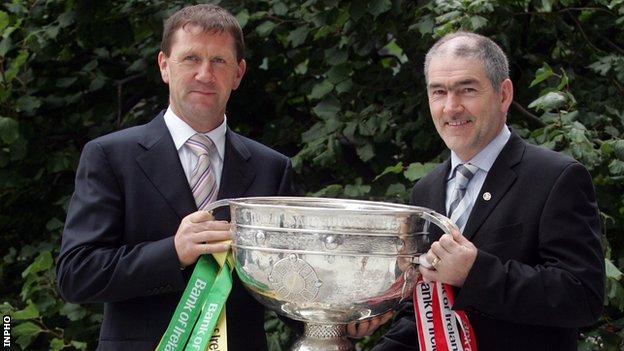 The Reds Hands have held a decided edge over the Kingdom over the last decade with an All-Ireland semi-final win in 2003 and final wins in 2005 and 2008.

Antrim's reward for the win over Galway is an away tie against Tipperary on Saturday at Semple Stadium [15:00].

The winners of Kerry v Tyrone will meet Clare in the last 12 with Tipperary or Antrim to face either Down or Donegal.

Kerry were decidedly fortunate to be in Monday morning's draw after fighting back from six points early in the second half to beat Westmeath 2-10 to 1-12 on Sunday at Mullingar.

Donegal face Down in next Sunday's Ulster Football Final at Clones with the losers going on to tackle either Tipperary or Antrim.

With all the third-round qualifiers taking place on Saturday, Kildare will face Limerick at Portlaoise [19:00] with the winners going on to face beaten Connacht finalists Sligo while Leitrim will also take on Laois on Saturday at Carrick-on-Shannon [19:00].

The winners of the Leitrim v Laois clash will face the losers of the Leinster final between Dublin and Meath.

The home venues for the fourth round qualifiers will be decided by the GAA after next weekend's games.

Antrim forward Michael McCann insisted that the Saffrons were not surprised by a victory over Galway which few pundits had seen coming.

"To us it wasn't a huge scalp. We knew we could beat Galway. We had the extra game [against London] on them," said McCann.

"We had the win over London and a tough game and Galway had nothing since they got beaten by Galway."

While Antrim fans will surely be delighted by the draw, McCann admits that Tipperary will also view the match as a glorious chance to reach the final 12 of the All-Ireland series.

"They ran Kerry close and then beat Wexford over the weekend.

"Tipperary are probably rubbing their hands and thinking they have more than a good chance of beating us.

In the All-Ireland Hurling Championships, the quarter-final draw has pitted Waterford against Cork and holders Kilkenny against Limerick.

Tipperary or Antrim v Donegal or Down