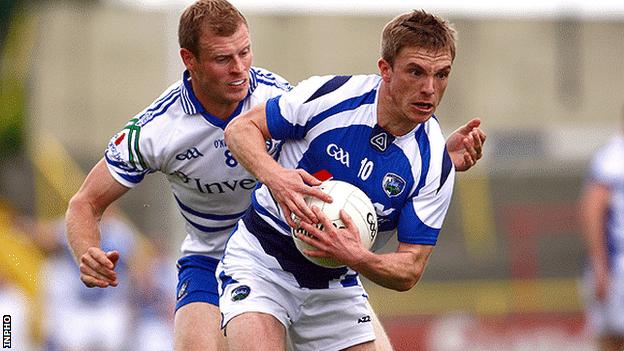 Monaghan's interest in the All-Ireland Championship ended as they lost 2-12 to 0-12 in Portlaoise in the second round of the qualifiers.

Eamonn McEneaney's men had an early 0-5 to 0-2 lead but Laois hit 1-4 without reply in an eight-minute period, the goal coming from Colm Kelly.

Big midfielder Brendan Quigley shot in the second goal for Laois who led 2-7 to 0-8 at half-time.

After the game, Monaghan boss Eamonn McEneaney said he was standing down.

It was a disappointing finish for the Ulster county after a bright opening.

But then came that spell between the 20th and 28th minute.

Munnelly landed two more frees, and Kelly shot in left-footed from play before the opening goal was scored with the ball breaking to Kelly who forcefuly found the net.

Padraig Clancy added another point and, although Monaghan scored through McManus and Finlay, they were hit by a second Monaghan goal drilled in by Quigley.

That saw Monaghan trail 2-7 to 0-8 at the interval and McEneaney's men managed just four more points in the second half.