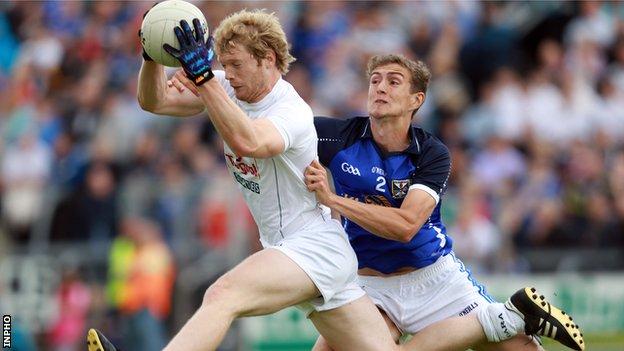 Kildare marched into the third round of the All-Ireland qualifiers by crushing the challenge of Cavan at Breffni Park.

They were 0-5 to 0-3 up when Mikey Conway scored the Lilywhites' first goal after a sweeping move upfield.

It was one-way traffic as Kildare piled on the points and netted their second goal when Emmett Bolton won the ball to blast past keeper James Reilly.

Eugene Keating netted a goal for Cavan early in the second half but Alan Smith netted late on for dominant Kildare.

Seanie Johnston, who recently made a high-profile move to Kildare from Cavan, came on as a substitute.

He went straight into the forward line in place of Tomas O'Connor and scored a late free, with Kildare already safely into the next stage of the qualifying process.

The All-Ireland Championship has two more qualifying rounds before getting to the quarter-finals.

Cavan made a decent enough start to the eagerly-awaited encounter, taking an early two-point lead thanks to frees converted by Jack Brady and Niall McDermott.

However, Kieran McGeeney's Kildare, favourites to progress, found their feet and after Alan Smith notched their first point from play, full-forward Eoghan O'Flaherty reeled off three frees for a two-point advantage.

Eugene Keating replied for the Ulster side but by now the Lilywhites were building up a head of steam, and scored from play through Smith and O'Flaherty.

Then Kildare got their opening goal with a fine move up the field culminating in Conway blasting into the net.

Niall McDermott registered a free for Cavan but that was to be their final score of an opening half bossed by the visitors.

Conway hit over a simple free and then wing half-back Bolton grabbed the second goal for Kildare.

Bolton moved into the forward line and, left unmarked, netted the score which took McGeeney's men into a commanding 2-7 to 0-4 lead.

Kildare piled on the agony with Smith scoring two more from play before the break.

Cavan briefly reduced the deficit when Keating used his strength to claim possession before calmly shooting into the net.

Gearoid McKiernan got a couple of scores for Cavan but there was no stopping Kildare with Smith and Johnny Boyle on target and O'Flaherty notching his seventh free of the afternoon.