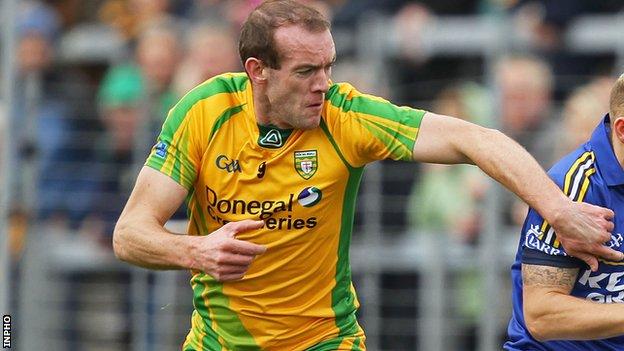 Donegal midfielder Neil Gallagher has been ruled out of the Ulster SFC final against Down at Clones after damaging ankle ligaments in a club match.

The Glenswilly man also chipped a bone in the game with Kilcar and is expected to be out for at least four weeks.

Gallagher has been one of Donegal's top performers this year.

Wing forward David Walsh is set to be fit after a hamstring problem but a similar injury is likely to keep Martin Reilly out of the Ulster showpiece.

Gallagher was rated doubtful for the decider after sustaining the injury but a subsequent scan has revealed the full extent of the damage.

"Neil will be using hydrotherapy pools for the next week to 10 days, while he has the ankle in a brace as well to make sure it doesn't move - it's very unfortunate for him," Donegal selector Rory Gallagher told the Irish News.

"He had been in great form, had a fantastic campaign for his club at the end of last year and had carried that form right through in his perofrmances this year.

"And really, he's been probably our most consistent player."