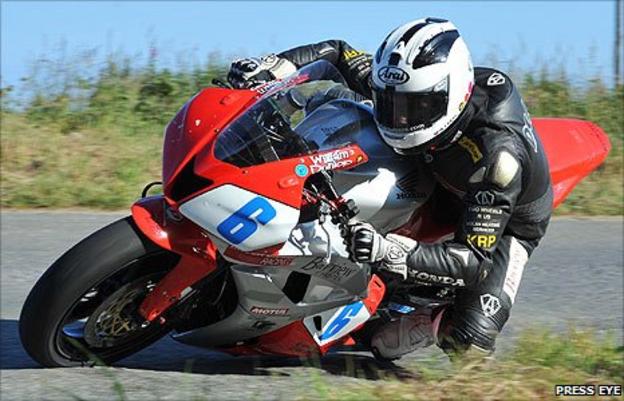 William Dunlop endured a mixed day at the Skerries 100 meeting as his two victories were then followed by him suffering an arm injury after crashing in the Supersport 600cc race.

Dunlop finished ahead of his brother Michael in the Open Race and then beat Davy Morgan in the 250cc race.

The Ballymoney rider is aiming to return for the Ulster Grand Prix.

The Dunlops occupied the top two places in the Open Race with John Burrows in third.

Farquhar finished ahead of Michael Dunlop in the Supersport 600 race with Dubliner Derek Shiels in third.

The Dungannon man then came in ahead of Jamie Hamilton and Michael Sweeney in the Supertwins race.

In the closing Grand Final race, Farquhar snatched a dramatic last-lap lead from Michael Dunlop to deny the Ballymoney man, who had been ahead for almost the entire race with John Burrows finishing third.

William Dunlop will miss this week's Southern 100 races on the Isle of Man, and is also set to sit out the Armoy races at the end of the month.

"There are no fractures but I have dislocated a collarbone and have a lot of bruising," said William.

"I don't have a lot of movement in the arm and I'll be lucky to make it back for the Ulster Grand Prix," added the 26-year-old.