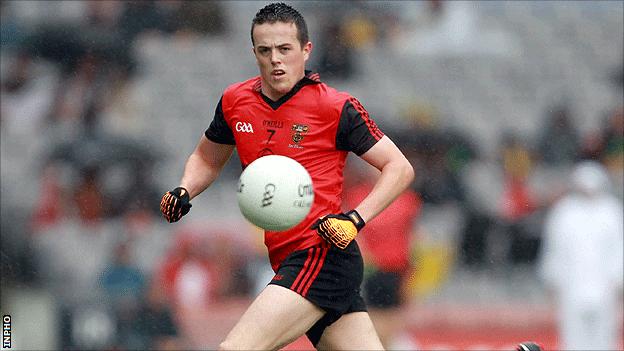 Conor Garvey's hopes of playing for Down in the Ulster Football Final appear to be over.

Garvey was handed a one-match ban for a stamping offence in the Ulster semi-final win over Monaghan.

His initial appeal was turned down by the GAA's Central Competitions Control Committee last week.

Defender Garvey was expected to launch a further plea to the Central Hearings Committee on Wednesday night but this did not happen.

The GAA's Central Hearings Committee imposed the ban after looking at video footage of an alleged stamping incident on Monaghan's Karl O'Connell.

The alleged incident occurred during the Mournemen's semi-final win over Monaghan on 24 June.

Down forward Benny Coulter said last week that his team-mate Garvey was devastated to be missing the final against Donegal at Clones.

"I think it is wrong, so many players in the GAA get away with it," said Coulter.

"There must be something against the Down players and I think it is a disgrace."