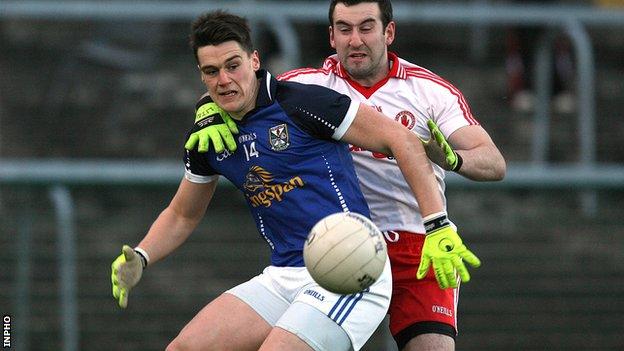 Cavan retained the Ulster Under-21 Football title as they edged out Tyrone 1-10 to 0-10 in Wednesday's final.

Darragh Sexton hit the only goal of the game from a first-minute penalty in what proved the crucial score.

Darren McCurry's second score of the game cut Cavan's lead to a point but three unanswered scores saw Cavan take a grip on the contest.

The Breffni County got off to the perfect start as Sexton hammered to the net from a penalty after the Tyrone defence had been ripped apart.

Frees from Richard Donnelly and McCurry left only a point between the teams before Tierney slotted a place-kick for Cavan.

The remainder of the opening half was cagey with Tierney and Brady [two] on target for Cavan and Harry Og Conlon and Donnelly among Tyrone's scorers.

McCurry's point after the restart cut Cavan's lead to the minimum but then came the key period of the match as a Tierney free was followed by the Breffni Boys' first score from play courtesy of Joe Dillon.

Another Jack Brady point left more than a kick of the ball between the teams although there was only two in it after Donnelly and Barry Tierney kicked Tyrone scores.

But Tyrone couldn't get any closer than two in arrears as Kevin Tierney's third point was followed by a superb Raymond Lynch score for Cavan.

Both teams kicked further points but Cavan comfortably held on to earn an All-Ireland semi-final meeting with Roscommon with Cork meeting Dublin in the other last-four clash.