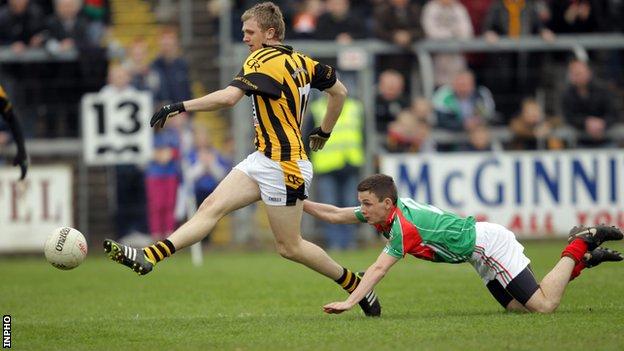 Crossmaglen retained their All-Ireland club crown with an awesome display in the replay against Garrycastle.

Two goals inside the opening 18 minutes from surprise packet Francis Hanratty did the damage as Cross romped to their sixth All-Ireland title in 16 years.

The Armagh champions never looked in any danger of succumbing to the Westmeath champions at Breffni Park.

The action started before the throw-in as there was pushing and shoving between the squads and Aaron Kernan then ended up on the deck at the end of the pre-match parade.

Dessie Dolan scored the first point of the game from a free but Crossmaglen responded with a brilliant goal from Francis Hanratty after five minutes.

Hanratty was a late inclusion in the starting line-up at the expense of Michael McNamee, and he was their ace in the pack.

He won the Garrycastle kickout, played it long to Jamie Clarke who weighted the return pass superbly right into his path without him having to break his stride.

He steadied himself and drilled the ball low into the far corner of the net to give Cross a lead they were never to relinquish.

Dessie Dolan was undertaking a salvage attempt at the other end, scoring a free and points from play off either foot as he tried to keep Garrycastle in the game.

He got them back to 1-3 to 0-3 behind but once Hanratty scored his second goal of the game in the 18th minute, it was game over.

Aaron Kernan put the after-burners on to surge straight through the middle and he thought about the point, but then changed direction, cut inside and fed Hanratty whose low finish was almost identical to his first goal.

Stephen Kernan's suspension robbed Cross of its important link man in the drawn encounter and he took control of things around the middle third at Breffni.

David O'Shaughnessy was the only other Garrycastle player to score in the first-half apart from Dessie Dolan as he converted a monster free from outside the '45'.

Jamie Clarke had a hand in a lot of scores and Oisin McConville's influence grew with three points in as many minutes just before the interval as Cross led by a massive 10 points, (2-8 to 0-4) at the break.

Garrycastle got the start they needed to the second-half when Gary Dolan found the net after three minutes, Dessie Dolan providing the killer pass, though the goal-scorer was booked for hitting Paul McKeown on his way back out the field again.

A couple of frees from half-time sub Conor Cosgrove gave them hope but Cross soon reasserted themselves and two points from play each from skipper Stephen Kernan and McConville saw them stretch their lead in the third quarter.

The second-half was devoid of any intensity whatsoever as Cross ran riot reeling off seven points in a row.

Oisin McConville received a standing ovation as he was withdrawn late in the game and there is speculation that he may have played his final senior game for the club.