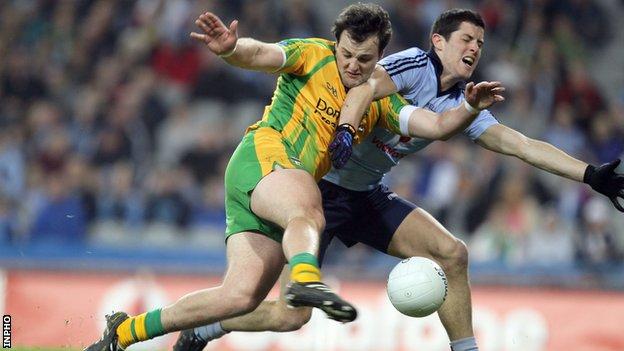 Donegal's hopes of avoiding Football League relegation have been dealt a blow after Michael Murphy was ruled out for six to eight weeks.

The forward came off injured in last Saturday's defeat to Dublin after damaging his lateral knee ligaments.

He will miss the last Division 1 game against Armagh and could be a doubt for the preliminary round of the Ulster Championship against Cavan on 20 May.

Donegal competed well against Dublin until Murphy's departure and the All-Ireland champions hit two late goals to earn a 2-16 to 0-13 win.

The defending Ulster champions currently occupy one of the two relegation spots although victory over Armagh most likely will be enough to keep Donegal in Division 1.