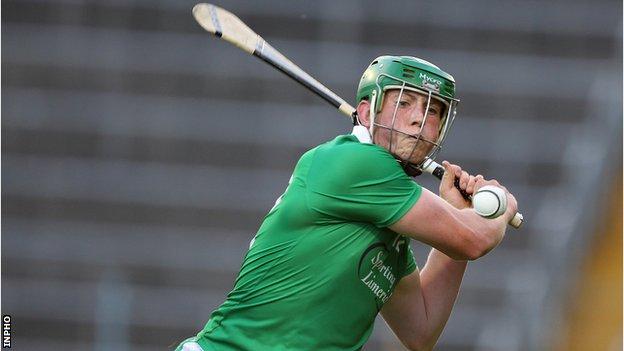 Limerick handed Antrim a hurling lesson as the Saffrons needed a sensational display from keeper DD Quinn to prevent a humiliation at Casement Park.

Another Dowling goal extended the margin to 2-12 to 0-8 at half-time.

Quinn was joined by another Loughgiel All-Ireland Club Final hero Eddie McCloskey in the Saffrons side and on the evidence of this display, Jerry Wallace's side will need Liam Watson and a few others Shamrocks stars for the upcoming championship campaign.

Free-taker Conor Allis finished with 11 points for John Allen's side who totally dominated their opponents.

Antrim had no answer to Limerick's power and pace with only Quinn and forward Shane McNaughton enhancing their reputations.

Galway referee Alan Kelly infuriated both the Antrim players and supporters with a number of his decisions but there was no doubting Limerick's total superiority over the 70 minutes.

Initially, the portents appeared promising for the Saffrons as Michael Herron and Neil McManus hit the game's first two scores.

The Saffrons also led 0-4 to 0-2 and 0-5 to 0-4 but that was as good as it got for the Saffrons as Limerick took complete control.

Points from Stephen Walsh, Dowling and Allis [two] put Limerick 0-8 to 0-5 ahead before Dowling lashed in the first goal.

The Antrim players felt that Niall Moran should have been penalised for over-carrying but the free was awarded and Dowling hit the ball to the net.

Two more Allis frees extended the lead to 1-10 to 0-5 and the game was already looking up for Antrim.

Dowling made an even better connection for his second 21-metre goal before the break which helped push the lead out to 2-12 to 0-8 by the interval.

Limerick continued to dominate after the break with sub Tobin's goal helping to extend their advantage to 3-17 to 0-10.

After the promise of the opening win over Wexford and last week's comeback success over Laois, a win could have earned Antrim a place in the promotion play-off.

Instead they were delivered a stern reality check by the impressive Limerick outfit who will face Clare in the Division 1B decider.