Manchester Thunder moved three points clear at the top of the Netball Superleague table with a dramatic 50-49 victory over title rivals Wasps in round 11 of the season.

And Loughborough Lightning won by a single goal for the second game in a row as they beat a stubborn Severn Stars 54-53.

Despite the defeat, Stars head coach Sam Bird said: "A huge thank you to our squad for the outstanding performance they put out.

"The strides we have made together from our first match are huge. We deserved a win. Proud to be the Stars head coach."

Wins for Bath, Lightning and Mavericks

Bath's tight 51-47 win over Strathclyde Sirens on Friday kept them in the hunt for a top-four spot, while Saracens Mavericks beat Surrey Storm to leapfrog Wasps and move into second place.

Mavericks are still without injured centre Gabby Marshall, but the experience of England internationals Sasha and Kadeen Corbin and shooting accuracy of George Fisher helped them over the line against an organised Storm.

Loughborough Lightning made hard work of their defeat of Stars, who could - and should - have taken the home win if they had not left it until the final quarter to catch up, when they outscored their visitors 14-7.

In Monday's fixtures, Celtic Dragons claimed a first home win of the season with a 62-51 victory over London Pulse, while Team Bath beat Stars 53-43.

Wasps entered the Thunderdome on Saturday level on points with Manchester at the top of the table but in indifferent form, having lost two of their past three games, one of them against Thunder.

Desperate to avenge that home loss on 6 March - their first defeat of the season - the defending champions stayed in touch with Thunder, shrugging off the pressure of a vocal and hostile sell-out home crowd and took a lead into the final quarter.

But Thunder, known for their comebacks and never-give-up mentality, were one ahead with 10 seconds on the clock. In an attempt to level and force extra-time, Wasps centre Jade Clarke hurled the ball in to shooter Rachel Dunn but the feed was too long and it sailed out of court.

Wasps next face bottom side London Pulse on 31 March.

Pets can be a welcome distraction after a long day at work.

They can provide you with love during your recovery from injury - as Manchester United forward Alexis Sanchez often displays on his social media with his dogs Atom and Humber - and in netballer Jade Clarke's case, to offer comfort after defeat by her former side.

England and Wasps centre-courter Clarke suffered a one-goal defeat to Thunder in her hometown and her automatic response was to retreat to her dog, Oscar. 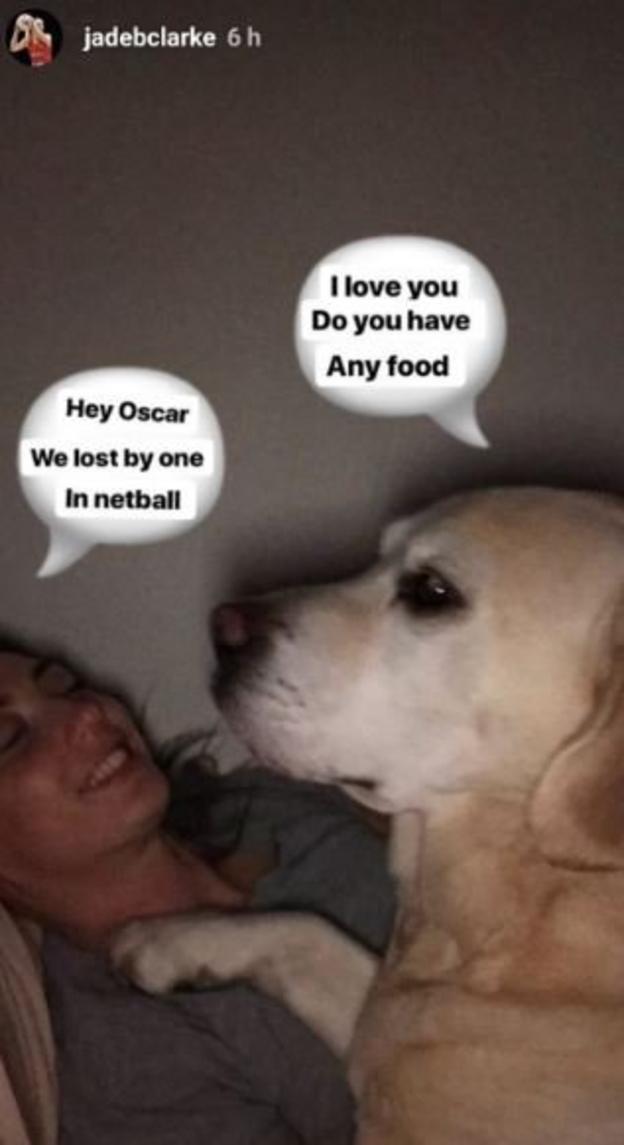