There are those who prefer to not play chicken with the Grim Reaper, who would rather their bones be unbroken and tendons unharmed. And there are motorcycle racers, tearing up the roads at 200mph.

"It wasn't so much the broken bone in my leg, it was that my knee was swollen and I struggled to bend it to get on the bike," says Britain's celebrated motorcyclist Maria Costello, recalling jumping back on her bike to race despite having broken a bone in her leg a week earlier.

"I was on crutches but capable enough to ride. I managed to beat some boys so I was happy."

The 41-year-old had clipped a curb during practice for last year's North West 200, one of the world's fastest road race meetings on Northern Ireland's north coast.

It was a stupid mistake, she says, which left her with a damaged knee and a broken fibula. Her hopes of competing that weekend were over. But to not compete in the Isle of Man TT - the mere mention of which gives her goose-bumps - a week later? Unthinkable. Nothing, not even her busted body, would stop that.

"I decided to go to the TT anyway with my supertwin bike. I didn't want to miss the TT because it's an important event for me," she explains.

Twelve months on and Maria Costello MBE, to use the title she was awarded in 2009 for services to motorcycling, is competing once again at the Isle of Man TT in the lightweight race. She is the only female solo racer at the meeting.

Her limbs will be intact this time, though, as the Northampton petrol-head continues her "love-hate" relationship with the island's open roads, having broken a few bones and been airlifted to safety on a number of occasions.

"I'm not dismissing the danger. I've experienced that side of things to a point, but if you're lucky enough to find something you really love and are passionate about, just go with it."

How dangerous is dangerous? Costello has suffered 24 broken bones and was once advised by specialists to stop her thrill-seeking ways. 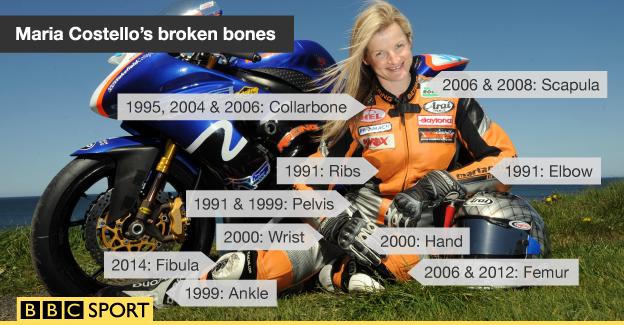 But she has an affinity with an event which has claimed the lives of 140 racers during its 108-year history because of what she has achieved there - becoming the first woman to secure a podium finish at the Manx Grand Prix and holding the female TT lap record - 114.73 mph - for five years before it was bettered by Jenny Tinmouth in 2009.

The paddock is still a man's world but thanks to Costello, the biker girl who developed from a defiant child into the best female road racer in the world, it is a far more liberal place than it once was. Although not everyone embraces the sexes battling together on two wheels.

"Guys really struggle when a woman is beating them on the track and they do tend to do unusual manoeuvres," says Costello, who calls herself the "grandmother of the gang", giggling as she does so.

"I've been taken out by a few guys doing some daft things.

"There are people who think women can't ride bikes and I've had all the comments over the years from men saying 'isn't that a bit big for you, love?'

"It's a tough sport and it's not made any easier if you're a girl. But I've been around a long time so a lot of people know who I am. It's all about educating people, showing them women can do it too."

Does she wish she was at the beginning of her career, benefitting from sponsorship deals and high-profile rides? "I do, I do," she says without hesitation.

"But I'm in a great situation now where I can help other female racers and mentor young girls, passing on a little bit of my knowledge.

"What's amazing is that we're seeing lots of women get lots of opportunities that I just don't think would have happened back in the day.

"Jenny [Tinmouth] has been signed by the Honda Racing British Superbike Team and is competing at the highest level in England. Elena Myers is competing in Superbikes in America... to get sponsorship, to get a chief executive of a big company to invest their money in a woman, it wasn't always that way.

"Female riders can attract a lot of publicity and that's what teams are starting to realise but I hope, one day, there'll be no differences and we can just get it on merit."

On a grey spring day in Derby, the first of three women-only track days at Donington Park, a number of women have gathered to meet and learn from Costello. Some admit motorcycling continues to be an intimidating sport for females but praise Costello - "a true champion for us girls".

But for all the recognition, from her peers, from the Queen, one woman continues to half-jokingly tell Costello to get a "proper job". Her mum.

Yet the future was there for all the family to see, with the young Costello spending every evening riding her Yamaha TZR with a group of boys in her Northamptonshire village.

Had she not received compensation for being catapulted off her bike while on her way to work, Costello might still be a veterinary nurse.

She describes that morning as a silver lining in a dark cloud, a collision which allowed her to buy her first race bike and set herself up for a high-octane life on two wheels.

"Since then I've not looked back," she says. "I remember going to watch a race at Mallory Park and seeing Sandra Barnett race and that was a key moment, seeing another woman do it. I thought 'if she can do it, so can I'.

"I went on a track day and one of the racers asked if I'd thought about racing. That was it, the green light. I've been racing ever since."