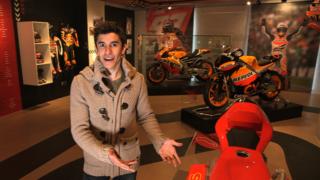 Marquez shows off his motorbikes

Two-time MotoGP champion Marc Marquez takes BBC Sport on a tour of his museum and the motorbikes that have defined his career.

From his first ever motocross bike, a Yamaha PW50, to his title-winning Honda RC213V, the 21-year-old Spanish rider shows off bikes that have helped him to become the fastest man on two wheels.

Marquez, the youngest-ever winner of the MotoGP title, has opened up the museum in his home town of Cervera, Spain and is aiming to add more items to his collection as he targets a third-straight title in 2015.

Codes from dressing room an 'experiment'