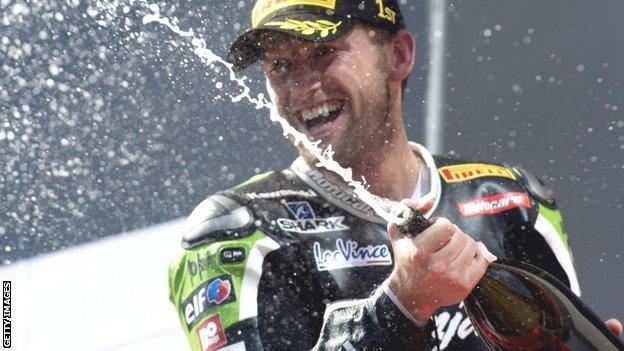 Britain's Tom Sykes has won the World Superbike Championship after finishing third in the first race of the final round at Jerez.

Sykes took the title at the Spanish circuit despite finishing behind Northern Ireland's Eugene Laverty and Italian Marco Melandri.

The 28-year-old Kawasaki rider went into the finale double-header with a 37-point lead over Laverty.

"I'm absolutely over the moon, so emotional," said Sykes.

The Yorkshireman - who missed out on the 2012 title by half a point - becomes the fourth British winner of the title after Carl Forgarty, Neil Hodgson and James Toseland.

Speaking to British Eurosport, he added: "I was shedding a few tears on the slowing down lap, I was shaking.

"There have been lots of sacrifices to get here. Finally we're here and what a feeling."