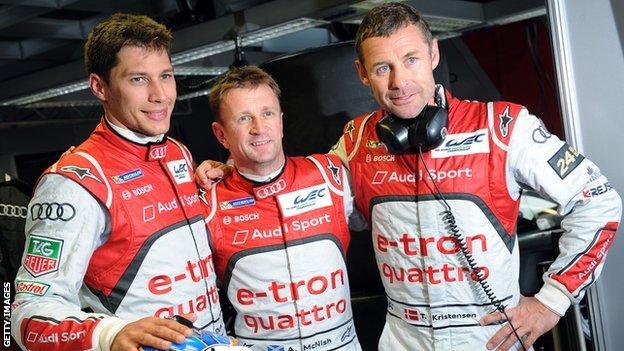 Scotsman Allan McNish won the Le Mans 24 for a third time as Audi clinched a deserved victory at La Sarthe.

The winning team also comprised Frenchman Loic Duval, who had never previously won the endurance race, and Dane Tom Kristensen, who takes his record tally of wins to nine.

The event was overshadowed by

It was a fourth successive Le Mans 24 victory for Audi.

Several hours of racing were lost because of safety car periods, of which there were a record total of 11.

The winning total of 348 laps was 30 short of last year's tally.

Former Formula 1 driver McNish previously won at Le Mans in 1998 and 2008, with the latter also in partnership with Kristensen.

"It's definitely the case that we had speed this year," said the 43-year-old. "The engineers did a really, really good job over the winter.

"Tom had one puncture and apart from that it was a perfect run from start to finish and you don't get many of those at Le Mans.

"But when you do and with the competition we've had from our sister cars and also from Toyota then that's what we needed to win."

And McNish paid tribute to Simonsen.

"We're racing drivers," said McNish. "We all grew up with a passion and a skill and we do what we love. We all know that something can happen, especially in races like this.

"It was a tragic loss, an absolutely tragic loss of someone who has so much talent and was so young.