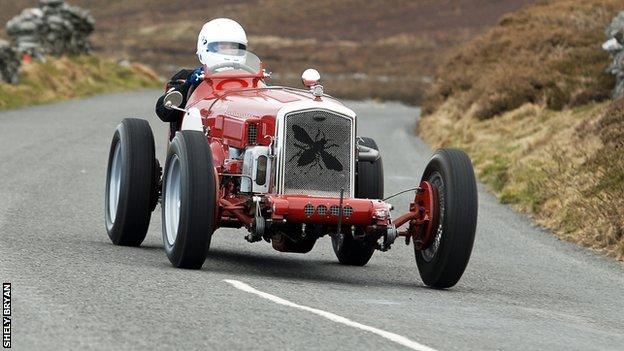 Nine course records were broken out of a possible 12 at the Manx Motor Racing Club's (MMRC) Manx Classic sprint and hillclimb over the weekend.

Eighty-five vintage, classic and modern sports cars completed the Isle of Man event, which is split into four classes depending on the age of the vehicle.

MMRC secretary Shely Bryan said it was a "year to remember."

Cars spanning 100 years of motoring entered the event from all over Britain and Europe.

The three-day rally began with the Governor's Sprint before hillclimbs on the Sloc and Lhergy Frissell.

In the Pre 1941 class, England's Tim Greenhill was quickest over all three courses, including setting a new record for the opening course, in a Wolseley Hornet.

Bremner set new records on both the Governor's Sprint and Sloc hillclimb but was pipped by Andrew Smith in the Lhergy Frissell climb out of Ramsey on the TT course.

Elsewhere, Welshman Mike Manning won the battle of the modern cars in the Post 1981 class. He smashed all the course records including a time of 44.12 seconds for the Governor's Sprint in his Ford Puma.

MMRC secretary Shely Bryan said she was "delighted with the racing pedigree of the cars".

She added: "I must pay special thanks to the fabulous marshals and officials without whom we wouldn't have an event."