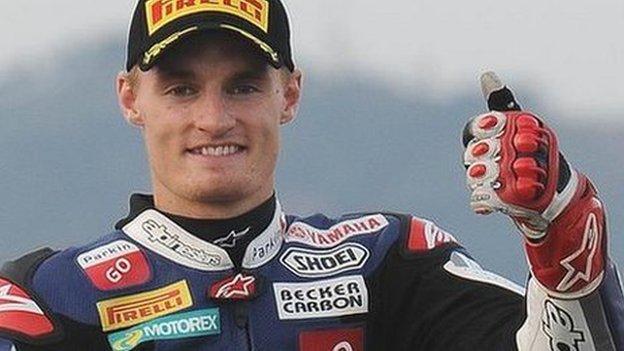 Chaz Davies believes he and his ParkinGo Aprilia team are showing the consistency to compete regularly at the front of the World Superbikes grid.

The 25-year-old finished fourth in the recent round at Aragon and then followed this up with his first-ever podium finish at the level, coming third in the second race.

He told BBC Hereford and Worcester: "It is much better.

"I would even say we exceeded our expectations there which was nice."

The Herefordshire man added: "Everything came together throughout the course of the weekend - we had tested there in the previous week, but so had everybody else so it was no real advantage.

"It was just a good chance to try things and continue the progression we have been making for the past few races," he added.

Davies says his team officials had always told him it would take a while to become truly competitive after stepping up from the World Supersport Championship last season.

While he accepted this would be the case, Davies said there were other issues that hampered their important early-season testing opportunities.

"I had two days at Philip Island where I was ill at the first race so we didn't get a lot done there," he said.

"Then it was a case of 'get to the races and do the testing there' which is never ideal.

"You're always on the back foot starting that way when everybody else has had at least six days riding the bike over the winter.

"It took a while to iron out some bugs but now we're on a bit of a roll as we've had a lot of top-six finishes in the last eight races," he added.

But Davies says the manufacturers have been very helpful in ensuring he and the team have every chance this season.

"Aprilia have been really good as they have given us all the support and they have been excellent in that respect," he said.

"It's quite hard as everybody is so fresh to the project and it can be a bit difficult if you have got no help."