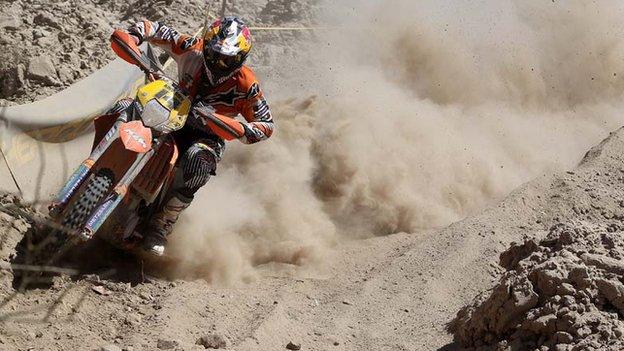 David Knight continued his campaign for a fourth Enduro 3 World title with two second place finishes in San Juan, Argentina over the weekend.

The Isle of Man rider finished both days behind Frenchman Christophe Nambotin, who leads the championship with a perfect 80 points.

The 33-year-old said: "The course was very physical but the heat magnified how tough it was."

Knight trails his KTM team-mate by 17 points after the two opening rounds.

He continued: "I think this was one of the toughest GPs for a long time. Overall I think the special tests were challenging, which made for enjoyable racing."

The 20-year-old GAS-GAS rider is just one point behind second-placed Jonathan Manzi, who won both days of competition. Italian Mathias Bellino leads the standings with 74 points.

The Isle of Man's Alex Rockwell is 12th overall in the Junior standings with a highest finish of 10th on the second day. Jamie McCanney missed the event after suffering a broken wrist in the opening round in Chile.

The third round of the EWC will be held in Spain on 5 May .