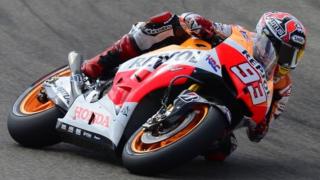 Marc Marquez takes another step towards winning the MotoGP championship in his rookie season by winning the Aragon Grand Prix in Spain.

Marquez finished ahead of championship rival Jorge Lorenzo, and now leads the standings by 39 points with four races to go.

'Battle of heavyweights' - what's at stake in Paris?

Azarenka and Kerber knocked out at Roland Garros