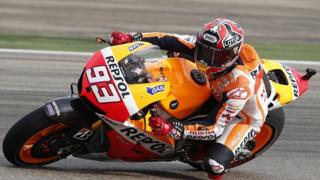 Championship leader Marc Marquez claims his seventh pole position of the season at the Aragon Grand Prix ahead of title rivals Jorge Lorenzo and Dani Pedrosa.

Marquez left it late to take pole with a 1:47.804 lap, with Lorenzo one hundredth of a second back, while Pedrosa will start third.