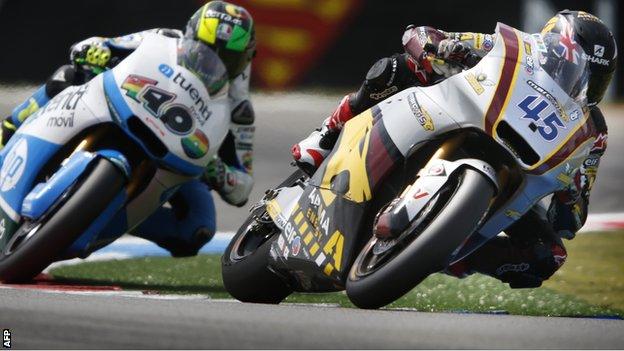 Redding, 20, extended his lead to 38 points with victory at his home race at Silverstone earlier this month but Espargaro cut the gap to 23 points with a win in Misano.

Redding told BBC Sport: "There is no pressure, we're just going to have to fight it out to the end.

"I look forward to that."

Redding is hoping to become the first Briton to win a world championship since Barry Sheene in 1977, and

With five races remaining the series next moves to Espargaro's home race at Aragon in Spain on 29 September but Redding is not worried by the home advantage of his Spanish rival.

He said: "Pol is going to want to push there because it's in Spain but I also like the track and if I can stay relaxed and let it come to me I can also be fast there.

"We've had some aggressive races so far this season and I'm sure there's going to be more, in fact in every race there seems to be more contact, but that's the part I enjoy about racing."

There have been six different winners in the Moto2 class so far in 2013 with Espargaro winning four and Redding three.