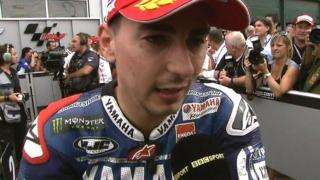 Yamaha's Jorge Lorenzo credits set-up changes made to his bike during the morning warm-up for enabling him to win the San Marino MotoGP at Misano.

But championship leader Marc Marquez says taking second place is "so important" for his title hopes after he prevails in a hotly contested battle with his Repsol Honda team-mate Dani Pedrosa.

The victory is Lorenzo's third in a row at the Misano circuit, and he now trails Marquez by 34 points in the standings.

'Ronaldo shouldn't be at Man Utd but has nowhere to go'