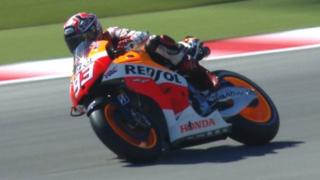 Honda's Marc Marquez breaks the lap record at Misano to take a stunning pole position at the San Marino MotoGP.

Marquez was over half a second clear of his nearest challenger, Yamaha's Jorge Lorenzo, who says it was "impossible" to compete with his Spanish compatriot's speed.

Nadal out of Wimbledon and the Olympics

Eriksen to have heart-starting device