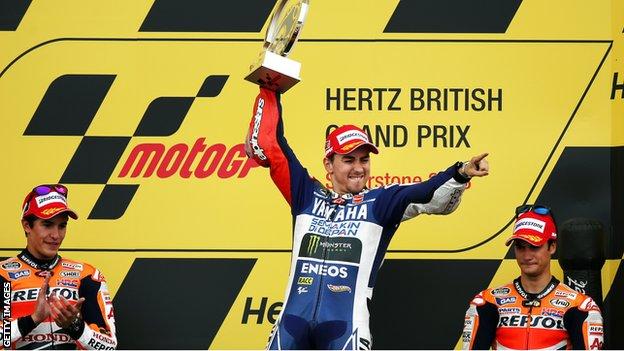 World champion Jorge Lorenzo called his superb win at the British Grand Prix at Silverstone "one of the greatest" of his career, but still believes his championship hopes are over.

Lorenzo, 26, fought off the challenge of championship leader Marc Marquez to take his first win since June.

"It's a very emotional victory, one of the greatest," said Lorenzo.

"But we are too far away in the championship. We have to concentrate on improving the bike and winning races."

He added: "At this moment in time, Marc is so strong and his bike is so good that we have to be perfect to win."

Despite losing out to Lorenzo, Marquez increased his lead over Repsol Honda team-mate Dani Pedrosa in the standings to 30 points, with the defending champion a further nine points back in third.

The 20-year-old Marquez was passed fit to ride just before the race after injuring his shoulder in a crash that saw his bike almost hit British rider Cal Crutchlow, who had come off at the same corner seconds earlier.

We can take a positive that I was faster than last year but everything else was a disaster to be honest.

But after medical assistance the youngster was able to continue his remarkable recent form, which has seen him take 140 out of a possible 150 points.

His second place was also his 50th podium finish in grand prix racing, making him, at 20 years and 196 days, the youngest man to reach that landmark .

He said: "I am so happy for these 20 points. After this morning I thought that my weekend was finished.

"But the doctors did a very good job and I felt not so bad, so I thought I will try. At the beginning of the race the pain was not a problem because I had an injection and took some pills but at the end I was tired and wasn't strong enough.

"I still tried the move on the last lap but I went wide and I knew Jorge would come back past me.

"I am leading the championship but you saw that I take the same risks. Always I will try to push and be there for the win."

The duel between Marquez - who is aiming to become the first rider to win the title in his rookie season since American Kenny Roberts in 1978 - and Lorenzo thrilled a crowd of over 73,000, who had hoped to see Crutchlow challenge for the win.

But the Tech 3 Yamaha rider struggled with the after-effects of three high-speed crashes in practice, slipping from third on the grid to finish seventh.

The Briton had destroyed both of his bikes on Saturday, with the first 180mph crash leaving him with abrasions on his arms, and was lucky to avoid further injury in the crash on Sunday.

Crutchlow told BBC Sport: "I couldn't battle, I couldn't challenge, I had no power in my arm and I had no grip on the bike.

"At least we finished, but the front three rode fantastic, especially Marc Marquez after his crash in the morning."