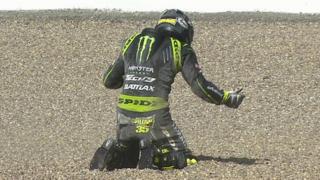 The Yamaha Tech 3 rider, at his home race, came off his bike early in the session - before making a similar mistake towards the end of FP3.

Crutchlow currently sits fifth in the riders' championship with 127 points.

Spurs edge past Burnley to move into fourth place