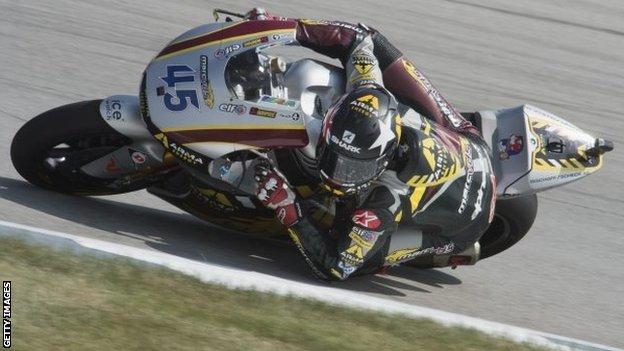 Redding, 20, holds a 21-point lead over Pol Espargaro with seven races of the season remaining.

And he aims to strengthen his position with a win in front of his home fans on Sunday before moving to MotoGP in 2014.

"At a home GP I feel indestructible and don't think about anything else than winning," he told BBC Sport.

"To get another victory at home would be awesome."

Redding has won his home race before, becoming the youngest grand prix winner in motorcycling history when he was first in the 2008 125cc race at Donington Park, aged just 15 years and 170 days.

And after finishing fifth in the Moto2 class last season, he has come of age in 2013 - winning twice and recording another four podium finishes to take charge of the championship.

A British rider has not won a championship in any class of grand prix racing since Barry Sheene in 1977, but Redding is confident of ending that wait before making the move to MotoGP and joining fellow Brits Cal Crutchlow, Bradley Smith and Michael Laverty next year.

He said: "I'm not under any more pressure because my target at the start of the season was to fight for the championship, and that is what I am doing.

"I was 43 points ahead earlier this season but I've used those points up now. I don't want the gap to get any smaller, and I want to extend my lead as you never know what can happen. A 25-point lead is what I want to keep as it gives you some breathing space.

"We've had some offers for next year and we just need to talk about them and see what we can do.

"But I plan to be in MotoGP next year. That's where I want to go and that's where we are taking footsteps towards."

Silverstone has seen three-day attendances of over 145,000 fans in the three years since regaining the British Grand Prix from Donington, and with Crutchlow having the best year from a British rider in years, and Redding on the verge of a title, hopes are high for even more this year.

Redding believes a full house will help him and the other British riders.

"It gives me confidence," he said. "At home when you are riding you can see out of the corner of your eye people clapping and cheering you on. You can feel the support. It helps you find that bit extra.

"I was second last year after a great fight with Marc Marquez so to get one better would be mega.

"It's always about being the best Brit. We're not a team, we're not at the Olympics or wearing the same colours. We are out for ourselves but it's good for the country to have a few people doing so well."