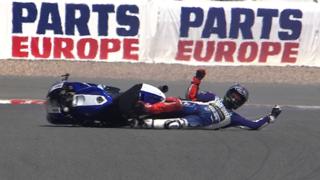 World champion Jorge Lorenzo lands heavily on his left shoulder during a crash in practice for Sunday's German Grand Prix.

Two weeks ago the Spaniard broke his left collarbone when he crashed, again in practice, at the Dutch GP and has damaged the titanium plate he had inserted following that fall, ruling him out of Sunday's race.

In a separate incident, Britain's Cal Crutchlow took a tumble as he lost control of his Yamaha at turn 11.

England on the charge against West Indies in second T20