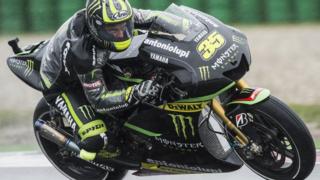 Watch Cal Crutchlow become the first British rider to claim a MotoGP pole since 2002 after securing the fastest qualifying time in Assen.

The British rider completed a superb lap of 1 minute 34.398secs right at the end of qualifying to put his Yamaha 0.357 seconds ahead of Repsol Honda's Marc Marquez.

Crutchlow told BBC Sport after the race that the pole "had been a long time coming".

Scotland one win away from qualifying