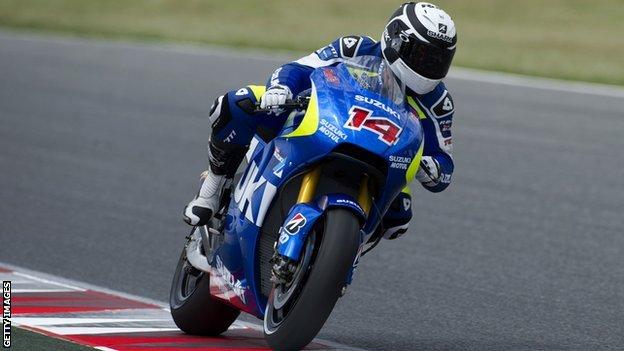 Randy de Puniet has spoken positively of the new Suzuki after its first public test at the Catalunya Circuit.

The Frenchman posted a time just seven tenths slower than Jorge Lorenzo's fastest lap of 1'41.908 on the same day that Suzuki announced it would

He said: "I think this bike has a really good potential already."

after 37 years to focus on development of their 1,000cc project.

De Puniet, 32, who currently rides an Aprilia for the Aspar CRT team but also has a contract as Suzuki test rider for 2013, first tested the 800cc version of the bike at the end of 2011.

And he believes the new 1,000cc bike has taken a step forwards.

He said: "This engine is smoother, the 800 was more aggressive. The position and the frame is very close, both bikes are very close.

"The 800cc was very good, I think they took the good points of it and they used it on this bike."

The Suzuki team will now travel to Aragon for a further day of testing.