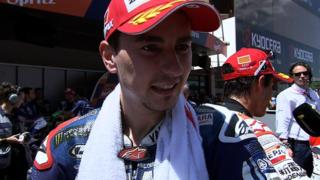 Jorge Lorenzo is delighted with an unexpected victory at the Catalunya MotoGP as concerns over his bike performance turn out to be unfounded.

Lorenzo has won consecutive races in warm weather at Mugello and in Catalunya despite fears his bike would not cope with high temperatures.

Euro 2020 disorder 'could have caused death'