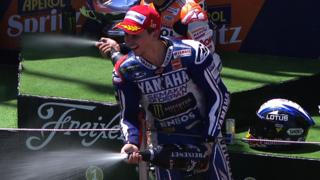 Jorge Lorenzo races to victory at the Catalunya MotoGP as fellow Spaniards Dani Pedrosa and Marc Marquez battle it out for second and third.

Lorenzo jumps up from third place on the grid to take the lead by the first corner and is untroubled throughout as the two Honda team-mates fight amongst themselves behind him.

British rider Cal Crutchlow, who started the race in second, crashes out early on and fails to get his bike back on the track.

Premier League predictions: Who will be champions?