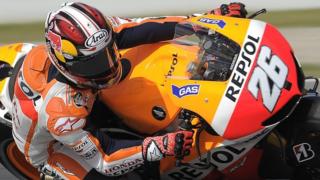 His lap time of one minute 40.893 seconds was more than enough to secure pole position and broke Casey Stoner's previous best at the Barcelona circuit by nearly three tenths of a second.

Houghton out of World Cup qualifier

Guardiola not sorry for fans comments