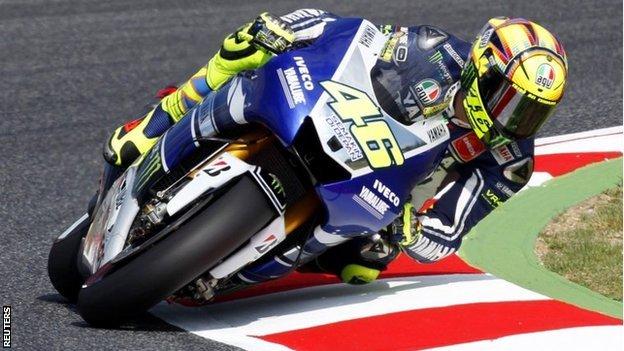 Rossi, 34, has won at the Barcelona circuit nine times throughout his career and pipped Yamaha team-mate Jorge Lorenzo with two minutes left.

Rossi was second on his return to Yamaha in the opening race of the season in Qatar in April, but has struggled since, and is currently only sixth in the world championship standings.

He spent most of the afternoon session outside of the top six but came up with a lap of one minute 42.297 seconds - inside the lap record - to take top spot.

Smith, 22, and was left limping away after another incident as he crashed at Turn Three.

Smith said: "I am lucky I didn't damage my body in the crash because it was another big fall.

"I lost the front and as I tried to save it the rear tyre gripped and threw me off. The bike hit my left knee and that's why I was limping in the gravel but luckily I am fine."