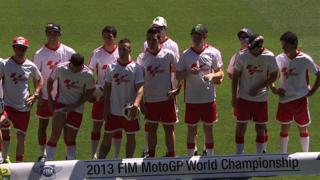 MotoGP stars, including Great Britain's Cal Crutchlow, take on a team of Moto2 and Moto3 riders in a football match at Barcelona's Nou Camp ahead of the MotoGP Catalunya.

Crutchlow was joined by Yamaha Tech 3 team-mate Bradley Smith, who will ride in Spain despite suffering a cracked wrist, a damaged finger and a black eye in two crashes before the Italian Grand Prix.

The match finished 4-3 to the MotoGP team, but Crutchlow joked afterwards he would be speaking to Fifa about the standard of refereeing.

'Fun to drive, but the danger is there'