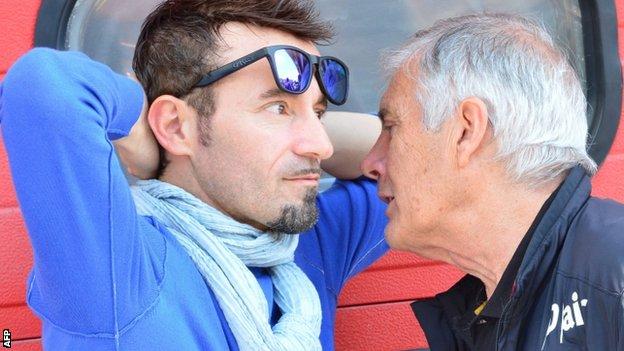 Max Biaggi is unlikely to return to racing, despite testing the injured Ben Spies's Pramac Ducati at a private test in Mugello this week.

The 41-year-old retired after winning a second World Superbike title in 2012.

The Italian ex-MotoGP rider has been given the chance to test Spies's bike after the American pulled out of the Italian GP due to his shoulder problem.

"I really don't think he wants to come back to racing," said Ducati spokesman Julian Thomas.

"He had made a few requests over the last couple of months just to have a go on the GP13.

"Because of the respect and esteem Ducati has for him and the close relationship he has with (Ducati MotoGP project director) Paolo Ciabatti, when the opportunity came up in Mugello with Spies unable to test, they got together and decided to give him a chance to try a couple of days on Spies's bike."

A four-time 250cc world champion, Biaggi last rode in MotoGP in 2005 with the factory Honda team. He has never ridden for Ducati in MotoGP but had one season on board a satellite Ducati in World Superbikes in 2008.

Spies's ongoing recovery from an injury sustained in Malaysia last October means the 28-year-old will also miss the Catalunya GP on 16 June.

Ducati test rider Michele Pirro is due to replace him in the Pramac team, riding Ducati's development machine.

Asked whether Pirro, who finished seventh on the "lab bike" last weekend as a wildcard entrant at Mugello, would continue to substitute Spies should the Texan miss more races, Thomas said: "That's the likely conclusion yes, because he is our fifth rider."

"Obviously it is going to be difficult for Michele to do racing and testing commitments as well but for the moment, for Catalunya, that is the decision that's been taken."