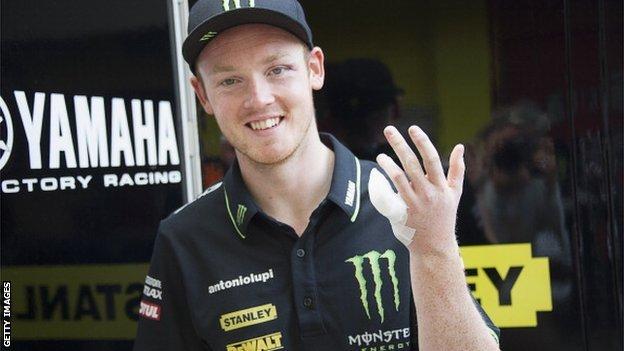 Bradley Smith has been cleared to ride at this month's Catalunya MotoGP.

Smith, 22, sustained a cracked wrist, a damaged finger and a black eye in two crashes ahead of Sunday's Italian Grand Prix, but finished the race in ninth.

After visiting a hand specialist in San Marino, the Briton told motogp.com. "The good news is I will be fit to ride again at the next round at Barcelona.

"The bad news is I've a cracked bone in my left wrist and the little finger on my left hand will be permanently bent."

Doctors were unable to carry out a planned skin graft operation because the skin was so badly damaged around Smith's finger, however they are confident both it and the crack in the wrist will heal.

The Monster Yamaha Tech 3 rider will undergo further examinations of the injuries between the forthcoming Catalan and Dutch races, the former on 16 June and the latter on 29 June.

He added: "After Catalunya I will get the finger checked out again to see how it is healing because it might be that I will need a skin graft at a later stage.

"The priority right now is to try and let it recover naturally. Once again, I want to thank all the Clinica Mobile staff and those responsible for my treatment in Italy because they are doing a wonderful job and I really appreciate it."