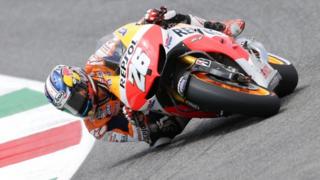 Dani Pedrosa steals pole position from Jorge Lorenzo in the final moments of qualifying for the Italian Grand Prix at Mugello.

Lorenzo had been in top spot for most of the session before the late intervention of Pedrosa, who claimed his first pole position of the season.

Italian Andrea Dovizioso will line up third, while Britain's Cal Crutchlow recovered from a crash to pick up fourth place on the grid.

Championship: QPR lead after 45 seconds at West Brom plus Coventry-Pboro

Europe strike first but US dominate