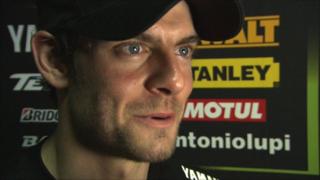 British rider Cal Crutchlow says he is "pleased with the way things have gone" after consistently challenging at the top of the timesheets during practice for the season-opening Qatar MotoGP.

Despite the promising pace of his bike, the Tech 3 rider insists his team are not thinking they have "suddenly arrived at the front", with factory Yamaha duo Jorge Lorenzo and Valentino Rossi also looking strong along with reigning Moto2 champion Marc Marquez on the Repsol Honda.

Crutchlow's rookie team-mate Bradley Smith was ninth on his MotoGP debut, also making it into the new second qualifying session on Saturday.