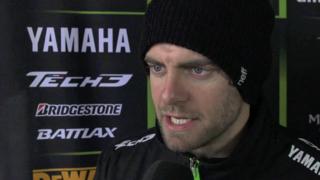 Britain's Cal Crutchlow says he is well prepared for the 2013 MotoGP season, but expects it to be "a lot harder" to finish on the podium.

On the third and final day of pre-season testing in Jerez, Crutchlow posted the fastest time of the session, and hopes that his experiences last season will stand him in good stead.

Crutchlow says he and his Tech 3 Yamaha team are pleased with their pace in testing, and are "quietly confident" ahead of the first race of the season in Qatar on 7 April.

Gary Speed’s death: A day of heartbreak and a decade of sorrow

Bresnan to face no disciplinary action

Pochettino 'has not asked to leave' PSG

What awaits Wales and Scotland in play-offs?