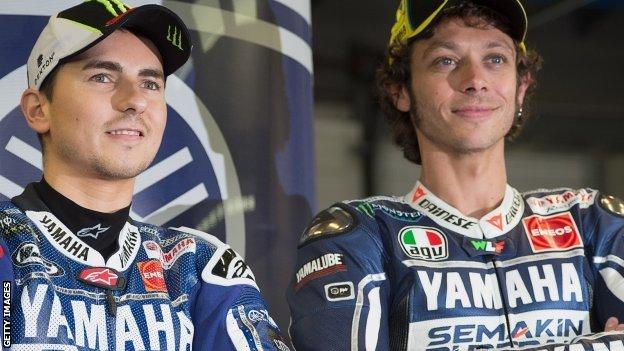 MotoGP world champion Jorge Lorenzo was quickest on a rain-hit first day in the final pre-season test in Jerez.

The Yamaha Factory Racing rider posted a time of one minute, 47.423 seconds, more than one second quicker than Honda duo Dani Pedrosa and Marc Marquez.

Lorenzo's team-mate Valentino Rossi was two seconds down while Britain's Cal Crutchlow was 2.269 seconds off the pace on his Yamaha.

Testing continues on Sunday and Monday. The season begins on 7 April in Qatar.

Rain is expected to further disrupt the remaining two days in Spain.

Saturday morning's session was virtually a washout with only nine riders venturing out for a timed lap in the opening four hours.

The afternoon was not much better but Marquez, who had been quickest on all three days at Circuit of the Americas, impressed in third considering it was the first time he had ridden at Jerez on a MotoGP bike.