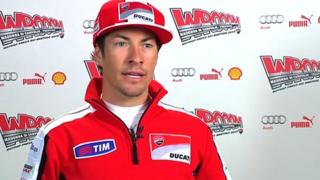 Nicky Hayden says the departure of Valentino Rossi from Ducati will allow the team to make a "fresh start" with "fresh ideas" ahead of the 2013 MotoGP season.

The 2006 world champion believes Rossi faces a "big challenge" after re-signing for Yamaha following two unsuccessful years at Ducati, but still states he "wouldn't bet against" 'The Doctor' lifting the world championship trophy for an eighth time.

Italian rider Andrea Dovizioso will partner Hayden at the Bologna-based outfit in 2013.

Kenny says opening up gave others a platform

Jones would welcome successor 'shadowing' him

MOTD Top 10: Could trophies be on their way to Spurs at last?